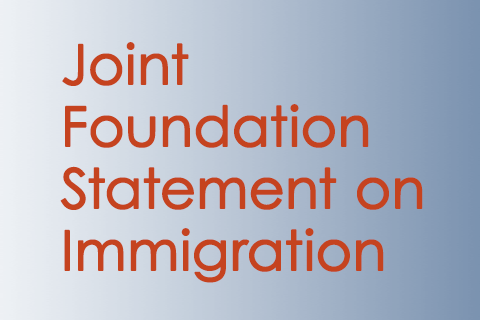 Learn about ZFF’s funding for immigrant and refugee services and support.

This statement was originally published by GCIR, Grantmakers Concerned with Immigrants and Refugees.

The United States stands at a historic crossroads. Founded as a refuge from religious persecution and built by generations of immigrants, our country has been the standard bearer internationally for the assertion and protection of inalienable rights and freedoms, a beacon of hope for refugees facing oppression and persecution, and a land of opportunity for immigrants seeking a better life for themselves and their families.

As philanthropic institutions, we have built our missions on this proud and rich tradition. We have invested in creating healthy communities, promoting diversity and inclusion, building a vibrant democracy, and advancing equity and equality for all people, regardless of gender, race, religion, sexual orientation, gender expression, immigration status, and national origin.

The recently issued immigration executive orders compromise our nation’s founding principles and the Constitution, our standing in the world, and our core values of liberty, justice, and due process. They weaken our moral leadership, fuel the efforts of those who wish us ill, harm our global competitiveness, and fray our social fabric.

Our foundations support diverse issues, strategies, and communities across the country, but we are united in the belief that immigrants and refugees are integral to every aspect of our society. Newcomers enrich our culture and tradition as artists, playwrights, and dancers. Naturalized citizens strengthen our civic life as voters, jurors, school-board members, and elected officials. Immigrant entrepreneurs and refugee-owned businesses revitalize neighborhoods, towns, and cities across America. Foreign-born scientists and engineers fuel innovations and help our country prosper. Farmworkers put food on our tables, and caregivers nurture our children, care for our elders, and nurse our ill. Young newcomers—including DACA beneficiaries—demonstrate their patriotism and enthusiasm for American ideals in schools, communities, workplaces, and the armed forces. Without the contributions of immigrants and refugees now and throughout our history, our collective wellbeing and economic vitality would be greatly diminished.

We, the undersigned philanthropies, join public officials, the faith community, business leaders, and the American public in supporting policies that protect our national security, strengthen our economy, and uphold core American values. We stand with our grantees—advocates, organizers, researchers, and service providers—in calling for policies that reflect our nation’s founding principles, promote cohesion and inclusion, instill hope, and show compassion. Policies that recognize our global interdependence, that honor our tradition of welcoming those seeking refuge and a better life, and that keep families together will make our communities stronger, safer, and more prosperous.

We expect additional challenges in the weeks and months ahead on the immigration front, including expanded detention and deportations, and on policies affecting the rights of women, African Americans, the LGBTQ community, and other vulnerable groups. The issues, communities, and core values that our foundations have sought to advance are under serious and imminent danger. With history and morality as our guide, we reject discriminatory policies that target individuals based on gender, race, ethnicity, religion, national origin, immigration status, sexual orientation, gender expression, and other grounds. We stand committed to the inherent value and dignity of every person at home and abroad. We stand together for the American Dream.

For more information or to sign the statement, contact Caleb Beaudoin. If joining, please provide the name of your foundation and the name and title of your signer (i.e., the CEO, the board chair, or both). A special thanks to GCIR members and funders for their support in making this statement possible.